When I was contacted by an arranger for a program on our movement by a journalist, I chose Tamilnadu for two important reasons. One was that the movement there must get due publicity and the other was that reading one’s prewritten palm leaves by the astrologers was supposed to very, very accurate according to many glowing reports on the net. I had visited one such a few years back and had exposed him but this time was an opportunity to do more, this time with prior preparation. The added attraction was that the sequence would be shot in high definition and expenses to be taken care of the by the company.

On the 8th June we went to a place sorry the place for Nadi jotidam- the Vaitheeswarn Kovil at Chidambaram about 250 kms from Chennai. Our team consisted of Gareth the producer, Brendon his son, Gurmith the photographer, Savitri Choudahry the arranger, Dr.Ganesh and I. We had cooked up a story for the astrologers- that Gareth was a wealthy textile tycoon and Savitri was his guide for all India, Ganesh for Tamilnadu and I for Karnataka. We were appropriately dressed for the occasion with large vermillion mark on the forehead and me in a long Khadi jiiba to hide my physique which would have made them suspicious of my claim to a poor retired laboratory technician now working as a tourist guide.

The minute we alighted from our cars a horde of unsavoury characters descended on us with offers to have our leaves read and that theirs was the only genuine Nadi jotisham! The moment we fell into the clutches of one and followed him, there were a few snide remarks from others that we were in the hands of a fraud and they were the real genuine ones! Ignoring them we went to the consultation chambers of Govi Jayaraman whose offices were appropriately situated between the elephant shed and the tonsure shed outside the temple. On entering the big boss, the textile tycoon was given a royal welcome thanks to his large hat and white skin. I the poor man was taken to a smaller room as my reading was supposed to be an afterthought! The tycoon generously offered to pay for my consultation too. They made a due search for the ‘leaves’ belonging to each of us. When queried as to where they were got from, were told that the temple was the source for all of them. Every morning they would visit the temple and obtain the leaves of all those who were preordained to visit them and it were inevitable that those who were to do so would do it! A really wonderful explanation for anything that would happen! However, they were prepared for any unforeseen things by saying that even the gods could sometimes make mistakes and there could be some. So, all the blame to be was on someone else. It did not matter that even if that were to be a deity. A preliminary showed that both of our leaves were there and there was a preliminary reading following which they said that a detailed report would follow in a few hours, we were asked to go for lunch and be back. The textile tycoon was being charged rs.3000 for his reading while the poor guide only 1500. When asked for the difference we were told that my reading was for Agastya Nadi while his was for Shiva Nadi not withstanding that he had told me a couple of minutes back that it was my Shiva nadi that would be read.

When we went after lunch two separate readings were arranged for us- the master and the servant. The master was told a lot of things about him which hitherto were unknown to him before. He was a womanizer and a quite few other things too! But, it was not he did in this life that was the cause, it was his past life! He as a Brahmin in Srilanka in his past life had impregnated a servant woman and when it was discovered she was poisoned to death. It was this sin of his past life that was weighing heavily upon in this life too and making him do all the bad things that he was doing. He was promised a solution too. In fact when we had gone on a visit to the temple, were directed to this place to have our leaves read. So, it was quite obviuos that there was a cozy symbiotic relationship between the priests and these Nadi jotishs. How could he forget them? His solutions were to perform appropriate pujas in the temple which would be done the way they should be! Of course by a person, whom he knows very well. The rich white man was told to make the payment in advance and the offerings would be sent to him by post at regular intervals as prescribed.

While it was that way for the master it was a little different for the servant. I assumed the identity of my brother in law Manjunath (my sister in laws husband) who had passed away on the 30th of April this year. The way they were trying to get the info was quite interesting and a not very good example of cold reading. For example they would tell you that your name starts with some alphabets and when you deny ask some other question about whether your father used a wear a cap and your mother a sari. After getting responses and some more details they would come back and ask whether your name starts with some other alphabets. Here since I had unwittingly revealed my name, or that was the impression I gave, they went directly into other details. With some encouragement from me the reader started delivering the usual rigmarole that they do. When I expressed fears about my health he told me that I would live upto the age of 80 and enjoy very good health till then. I did not have a colorful past life as my master had. I was a poor Brahmin at Palakkad and had died at the age of 40 in my past life. However, I was promised that the problems could be solved very easily by performing pujas for a long interval. As usual I was told he has friends in the temple that would be glad to do them for a suitable price and no fraud. I was also assured that it would be seen to that the offerings made to the gods on my behalf would be sent by post as prescribed.

Though I was sorely tempted to confront them and expose their fraud I had been told specifically by the producers of the program that we should not do that. However, the modus operandi was very clear get the victim to give them the needed info and then whatever that could not be gathered would be elicited either by the process of elimination or deduction. So, much for the glowing reports on how they gave in writing all the events of the past including the names of one’s parents, grandparents etc. The process of obtaining the information is so obvious that it would be dimwit who could not find out that. It is my feeling that the people who go in for this do go with expectations and accept the things said without question. Again, they force people to wait in rooms which must be wired and pick up hints from their conversations.

When we went around the temple we saw hordes of people waiting for pujas and rituals to ward of the ill effects of the planets in which this temple is said to specialize in, squalling infants being brutally shaved bald of their hair in a ritual called as the first tonsure. There are a variety of touts who would even tell you to get the rituals done paying them at a discounted rate than getting them performed by paying the so called official rates at the office! Ganesh who had come with me tried to have some secret confabulations with them as he was supposed to be the tourist guide of the rich man. They told him that he should have informed them before and they would see to it that he would be paid a handsome commission.

The modus operandi is quite clear- keep on hammering until you hit the nail on the head. Exploit the credulity of the person and play by the ear. The things put in writing are those put in after the cold reading is done. So, the client is given an impression that all details are put into writing in minutes. The gullible people fall for this nonsense, pay through their nose and get into problems. The solutions they propose are all not innocuous as they seem. They also venture in the realm of black magic and many times cause rifts between close friends and relatives by telling them that the black magic has been done by someone close to them by friendship or relation by blood or marriage. Many times though not always it is the poor who fall into the clutches of such people and lose their hard earned money. In case of the rich textile tycoon they could see that he was wealthy, a foreigner and has fancies to things Indian. They were even fooled about the professional videographer when they were told that he would like to present the videos of his travels to his wife! In my case they could make out that I was a man with problems- the image that I was trying to project- and treated me accordingly inventing problem after problem for my three children- the eldest a motor mechanic in Dubai, the second who married a lower caste girl and my daughter whose marriage got cancelled because of his indiscretions! The secret is to prepare a nice story before hand and go with details ready in mind. Better select a date of birth near to your own of some one of the opposite gender or is no more. This is so that there will be no confusion about the star and sings of the zodiac. Some of them may be clever enough to find that. The leaves before them have things in writing probably in code language and I suspect these are questions already kept ready to hint for step by step questioning to elicit the proper answers needed to do the readings. I could make out that they are not expert cold readers either. We also went to one more nadi jotish at a place near Chennai , the details of which I am not free to disclose as something else is being planned for him. But, by contrast to his poor cousins on the street and huts he was sitting in a house with air conditioning and a number of people around whom he said were his interns. Their looks and mannerisms however were more befitting that of practitioners of women’s oldest profession. So, much for the accurate ‘science’ of Nadi jotidam. 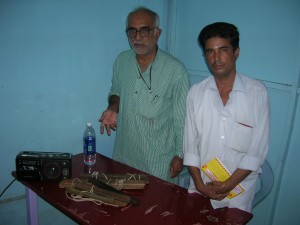