rationalthoughts.org Posted on December 31, 2018 Posted in Uncategorized No Comments 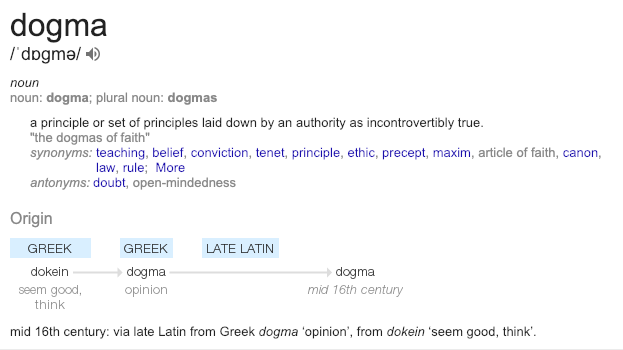 Dogma is a major factor that leads to a theology of separation. We all have access to a Natural Moral Code predating any man-made religious magical and superstitious beliefs. However, we interpret universal moral codes the way we experience life. Universal moral codes are interpreted by a human nature that includes solipsism and a collective ethnosolipsism. Religions are man-made interpretation of nature-made universal moral codes based on their experience of Nature and human nature. Religions develop intractable dogmas, doctrines, and religious fiats to conceptualize and compartmentalize their ideological interpreted beliefs. Sometimes dogmas conform to Nature but often they don’t. Religions have their unsavory facile dogma, doctrine, fiats, and precepts that are no more than parodic exaggerated diktats. Each religion teaches a triumphalism that makes their authoritative diktats superior to all others.

Pontificating dogma locks religions into defending stupidity. Religions have a pontification of their dogmatic opinions being the only way, and a messianic soliciting proselytizing of the truth as they see it. I put forth that religions often do a better job of worshipping their dogma than their God. Each religion demands putative follower subservience, submissiveness, and obedience to stultified dogmas. Dogmatic dictums say we have the penultimate truth. Dogmatic beguiling proclamations of having knowledge of truths and Truth become dogmatism that quickly morphs into a moralism of do’s and don’ts. An infestation of rancorous dogma cripples the ability for individuals to personally experience truths and Truth. Dogmatic truths/Truth are repeated over and over again because they need to be repetitive! J. Krishnamurati said, “the constant assertion of belief is an indication of fear.” (20th Cent)

“It takes only one generation for  a good thing to become a bad, for an inference about experience to become dogma. Dogma is the enemy of truth and enemy of free thought. Dogma says “Do not think?”

Be less than a person. The ideas enshrined in dogma may include good and wise ideas, but dogma is bad itself because it is accepted as good without examination.”   (Harris, 1969)

I am easily irritated by phantasmagorical surrealistic nonsensical dogma. Putrifying no-sense dog- ma is a pejorative brutalization and bastardization of anything that has to do with truth. Deprecatory doc- trines become “My God,” God favors me, I know God’s mind, and I am one of the chosen ones. My God invariably involves the human traits of solipsism and ethnosolipism. My God leads to a Deo vindice or “God on our side.” Deo vindice generally leads to a condescending demonization of other religions and a bitter denunciation of other faiths. Lao Tzu was so accurate when he said, “Lord, let us empty ourselves of doctrines.” (4th Cent BC)

“My own suspicion is that we might consider dogma of any kind a monkey wrench in the works of the intuitive process. Any unquestioned pre-emptive belief may block the exploration of what our minds are trying to tell us. Any rigid position whether it concerns the shape of the earth or human consciousness has the potential to shut down intuitive insight. Rigid conviction is therefore often a symptom of a wicked environment. Conversely, kind environments tend to be for giving and promote openness.”

Fideists are those brain dead hardline religious addicts having an ad hominem faith based on a regurgi- tation of beliefs without reason or logic. Fideism is a decerebrelization that puts ratiocination to sleep, and makes for a catatonic state of cerebral paralysis. It is a capitulation and abdication of the working brain’s critical thinking skills of analysis and synthesis. Fideism is an unctuous robotic captivity of booboisie minds. It is concrete reactive thinking and a mechanical interaction with life. Schopenhauer said, “faith and knowledge are related as the scales of a balance; when one goes up, the other goes down.” (19th Cent)  Fideism is an apodictic fervor with an absolute certainty of having the truth. Incontrovertible faith is dangerous because it justifies religious extremists to do deplorable things —> eg. Christian crusades or Islamic jihadism. Fideism is a radicalization condoning religious atrocities of all kinds. Pascal suggested, “men never do evil so completely and cheerfully as when they do it from religious convictions.” (1669)

“When a man has brought himself to accept uncritically all the absurdities that religious doctrines put before him and even to overlook the contradictions between them, we need not be greatly surprised at the weakness of his intellect.”
(Sigmund Freud, 20th Cent)

Fideism involves a piety (devotion) to religious duties, no matter the consequences. Fideism is early Limbic Brain rooted belief brainwashing. Early rooted belief fideistic followers have a supplicatory obeisance to baseless man-made dogma. Fideists are supportive of religious dogma that has whipped them into a frenzy of superiority as the “chosen ones.” Fideism is a symbiotic and parasitic relationship with rigoristic dogmatic fanaticism. Fideists include those lackeys who are “born again” and have unfortunately become locked into a restrictive and repressive fundamentalist dogma. Those claiming to be born again are stuck at best at a basic level of balance, concrete operational thinking, and a Level I Morality —> fear of punishment and hellfire.

The above is an excerpt from Chapter 19, “The Great Mysteries”, from my book, Balance- ology:  The 4 M’s of motivation, meaning, measurement, mitigation.  In this excerpt, I try to make a case that all forms of dogma are a strike at the very heart of rational thought.  Al Wm. Johnson, PhD #Balanceology.blog.